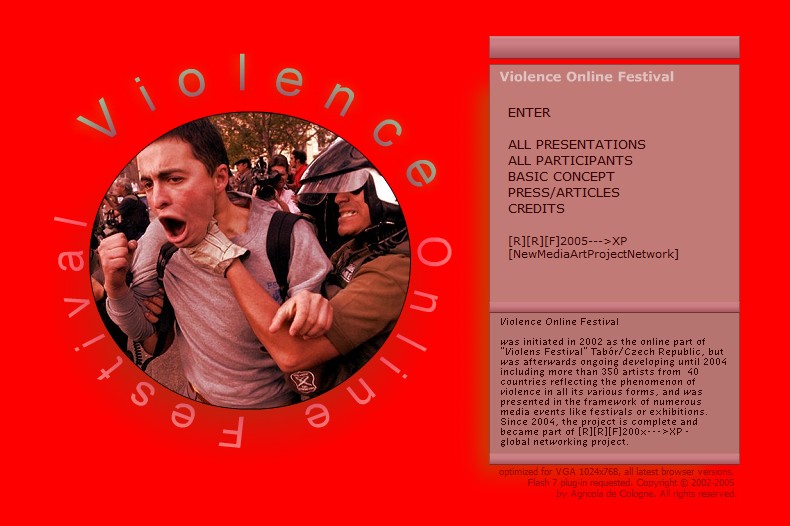 More than 350 artists from 40 countries reflect the phenomenon of violence. Violence Playstation was launched on 19 March 2003, when the war in Iraq began.

Summary:
“Violence Online” is a New Media art project in form of an online festival curated, organized and created in Flash by Agricola de Cologne, curator and media artist operating from Cologne/Germany. Violence Online Festival was created as an ongoing project for being presented in the framework of physical and virtual media festivals and exhibitions. For each event a new project version had been created adjusted to the actual needs including additions of new artistsm and their works, updates and modifications..

Preface:
Violence is an expression of speechlessness, of lack of communication. The best solution to eliminate violence and confrontation is looking for communicating, dialogue and networking, starting already in the smallest cell of society family, which lead in consequence to openness against the different, tolerance. A good example on the way to that represents the net based art project – http://www.a-virtual-memorial.org – Memorial project against the Forgetting and for Humanity. (by Agricola de Cologne, published as Article 20 in – Covenant of the Articles of Artistic Mediation on World Mediation Summit Washington 2002 )

Violence Online Festival
was successfully presented on numerous festivals and media art exhibitions and received in the Special Prize of the Organsation Committee of Computer Space Festival 2002 Sofia/Bulgaria.