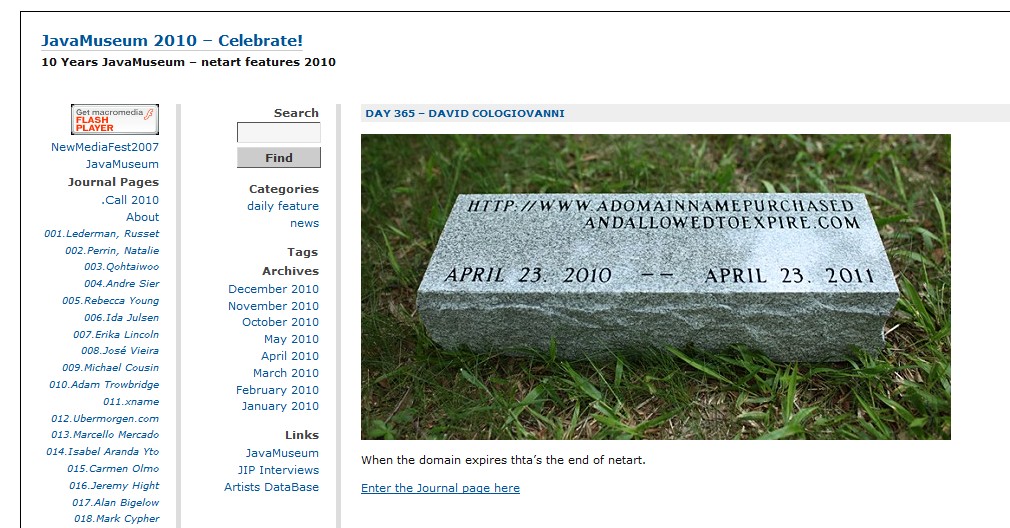 In 2010,
NewMediaFest’2010 – is celebrating 10 Years [NewMediaArtProjectNetwork]:||cologne – the experimental platform for art and new media – founded 10 years ago, created and devloped by the Cologne based media artist Wilfried Agricola de Cologne during the past 10 years as a media art project in an exchange between virtual and physical space., structures which gave him the freedom of an independent ( and non-commercial) art creation in a dimension which is worldwide singular.

NewMediaFest’2010 – is a networked event structure organised between 1 January 2010 and 31 December 2010 in form of a festival taking place online on the incorporated project platforms of the global network and in physical space via partners, festivals, institutions, organisations and individuals.

NewMediaFest’2010 – will form the framework for initiating new projects & cooperations and other art related activities during the year 2010, as well for spotlighting the most important projects and their history realised during 10 years on the numerous project platforms of the global network.

NewMediaFest’2010 – represents also a way of thanking all those artists, curators, organisations, institutions and individuals who were participating in the activities of the global network. Without them, it would have been impossible to explore the networking capabilities of the Internet as an artistic medium and environment.

NewMediaFest’2010 – is coordinated online via its website as a blog in form of a daily journal displaying each day new and different program aspects during the entire year. At the end of the year 2010, NewMediafest’2010 will be completed as a new media art project, which will remain available online for permanent.

NewMediaFest’2010 – includes the net based platforms

and at its start following physical partners as a basis

At its start, on 1st January 2010
NewmediaFest’2010 – is not representing an already fully developed event, but rather the start of an experiment and above all a challenge for all involved parties in the sense of a living culture.
NewMediaFest’2010 – is initiated, coordinated, realised and directed by Wilfried Agricola de Cologne in a variety of identities (as an artist, curator, programmer, producer and much more) within the framework of the internal & external structures of his global network, but rather executed as a live action, which allows him to react spontaneously on new or changing situations and developments.